Welcome! This website uses cookies.
Nice that you visit our site. Please indicate here which cookies we may place. The necessary cookies do not collect personal data. The other cookies help us to improve the site and your visitor experience. They also help us to inform you about our products. Are you going for an optimally working website including all the benefits? Then tick all the boxes!

Three point bearing tonearm
H.J. Fokkema, January 2021
ABSTRACT
A design of a tonearm bearing is described here, that has zero play, very low friction and excellent stability. It combines the advantages of a unipivot tonearm and those of a gimbal bearing. I have not seen this design in any tonearm on the market. It was developed in the early eighties of the last century, in the heydays of the gramophone. Nowadays vinyl has regained the interest of HiFi enthusiasts. That is why, after several decades, the design is described here.
INTRODUCTION
Although there are a variety of digital music sources easily available, there is another one that might give much pleasure while offering its own high quality standard: vinyl, which is the modern word for the old-time record. I had great fun in designing and constructing tonearms (or any other part of a turntable for that matter). Especially when they have unique design properties that give them a quality that easily rises above many of the tonearms on the market, and they are not very difficult or complex to build.
Now that the interest of HiFi enthusiasts in vinyl has risen again, there is enough reason to spend thought and time on this challenging and exiting subject. So, I remembered the thoughts and ideas on tonearm design I had in the nineteen eighties, just before the CD appeared on the market. I built several tonearms then, both unipivot and improved versions.
This article concentrates on bearing design. So, other noteworthy subjects, like resonance and sound colouration in tonearms, are disregarded.
WHAT IS TO BE EXPECTED FROM A TONEARM BEARING?
A tonearm bearing will allow the cartridge to move along a part of a sphere, without rotating about its own axis. Movement shall be without friction (and without play, of course, otherwise it won’t be a sphere). So the cartridge can effortlessly move up and down as well as sideways along this sphere. It will not move in any other direction.
Moreover, the effective mass (including the cartridge) must result in a resonance frequency of around 10Hz, both horizontally and vertically. The bearing layout and the necessary mass distribution should account for this.
EXISTING DESIGNS
There are two main principles of tonearm bearing: gimbal and unipivot. There are several more exotic and less useful types of bearing, e.g. magnetic suspension, and I even came across an inflated ball floating in a liquid. I shall not go into these topics, because they are not widely used in tonearm construction and often they are impractical or suffer from other disadvantages.

Fig. 1. Gimbal bearing
The gimbal bearing (fig. 1) is the most widely used kind of bearing in record players, both cheap and high-end. It has the advantage of stability, and it is easy and cheap to produce if there is no aim for high quality. But, in gimbal bearings there is always a compromise between friction and play. If there is play, there will be little friction; if there is no play, friction will be present. Good gimbal bearings have been made, but their production process is laborious and costly if they are to meet high standards, and essentially they always suffer from this
compromise between friction and play.

Fig. 2. Unipivot bearing
The unipivot bearing (fig. 2) is great in that it achieves the goals of low of friction and absence of play. But it is deficient in terms of the second goal, since the tonearm can easily rotate about its axis. It is held upright because the counterweight is in a lower position than the pivot. Any impulse on the stylus in the lateral plane will result in a rotation of the arm tube. It lacks stability, and the azimuth of the cartridge can oscillate around its optimum value. This especially becomes a problem when the stylus fits the record groove better, which is why a spherical stylus gives fewer problems than an elliptical one or a shibata type. The latter can damage the groove if the azimuth is not
correct.
Another disadvantage of unipivot bearings is the fact that the arm’s effective mass in the horizontal plane is less than in the vertical plane. This is a result of the lower position of the counterweight. This weight hardly contributes to lowering the arm-cartridge resonance in the horizontal plane. That is why additional mass is sometimes used on both sides of the pivot. Also, any horizontal arm-cartridge resonance will result in rotation of the arm tube.
THREE POINT BEARING
I developed improvements to the unipivot bearing, in order to eliminate its disadvantages. The design is based on a unipivot tonearm, in that there is a central pivot for the horizontal rotation of the arm. The rotating part of this pivot is a yoke, which contains two knife bearings to make vertical rotation of the arm possible. These types of bearing both have very low friction and play. Fig. 3 illustrates the layout of the tree point bearing. The yoke must of course be kept horizontal. How this can be accomplished will be described below.

Fig. 3. Three point bearing, front view (seen from the cartridge) and side view. 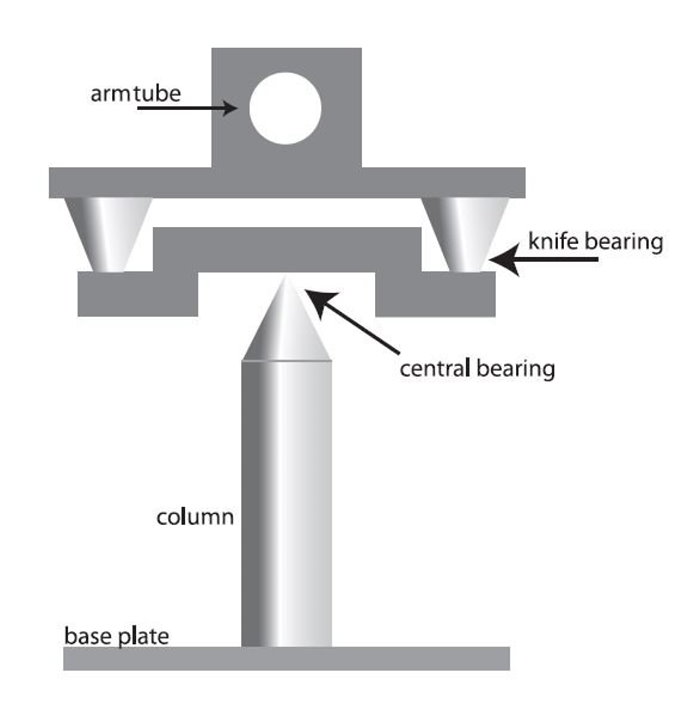 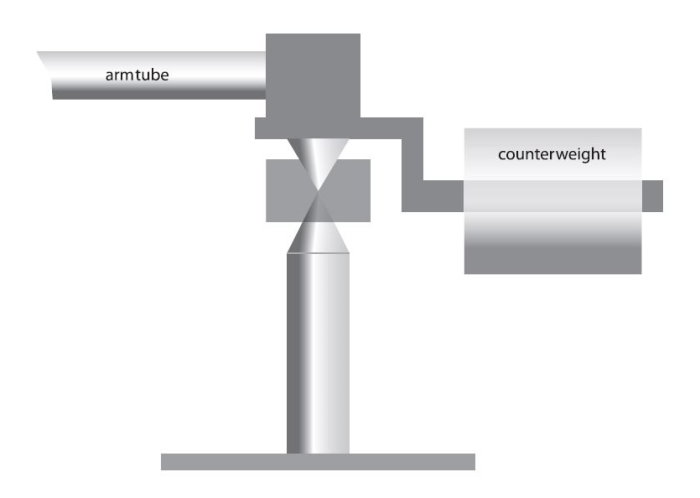 The counterweight only has the function of balancing the arm, as in gimbal arms. It should be at the same height as three bearings, which is of course the height of the record. If the yoke can be kept horizontal, this layout eliminates two disadvantages of regular unipivot arms: their tendency to rotate about the arm tube’s axis, and the inequality between the resonance frequencies in the horizontal and vertical planes. It also eliminates the disadvantage of gimbal arms: it has both very low friction and no play.
It is essential that the three bearings be positioned in a straight line. Otherwise the way in which the yoke is kept horizontal will be compromised, and the whole thing would be much like a common gimbal bearing. I can think of three ways to keep the yoke horizontal: by means of a weight, a bearing, and by magnetic force.
WEIGHT
A weight can be fixed beneath the yoke to keep it horizontal. It can have the form of a ring that is able to rotate freely around the central pillar. This weight will keep the arm upright, and will not move by any force applied to the stylus tip, except the turning motion. The arm will make no unwanted movements. Fig. 4 illustrates this. 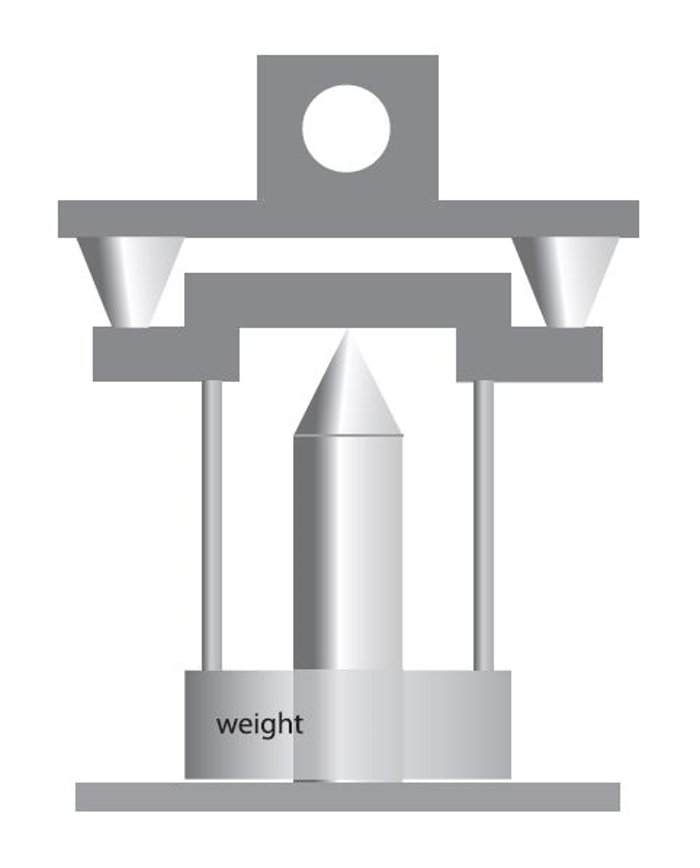 Fig. 4. The use of a weight to keep the yoke horizontal.
It is essential that the three bearings be positioned in a straight line. Provided that the system is designed correctly and the adjustments are right, excellent results from this bearing can be obtained, and there are no problems in using more advanced stylus forms like shibata or fine-line.
It can be viewed as a unipivot tonearm in which the counterweight is split up in two separate weights, each with its own function: one to balance the arm and one to keep it upright. The frequency with which het weight will swing, must be outside the resonance frequency of the sub-chassis.
BEARING
A second possibility of keeping the yoke horizontal is the use of a fourth bearing. It should be positioned exactly below the central bearing, which is inside the central pillar. This fourth bearing is not critical, since its only purpose is to keep the arm straight up. A little play is not much of a problem, although friction is. Play will give rise to the possibility of rotary movement of the arm tube. Every reasonable amount of play will result in only very small movements of this type. For instance, when play is .05 mm (which is a lot) and the distance to the central bearing is 50 mm, the arm tube will be allowed to turn .057 degrees.
This fourth bearing must allow the yoke to move up and down; it will not support any weight. A sliding bearing can be used. I used a 1 mm steel rod in a bronze bearing. I added a small drop of silicone oil to avoid any rattling that might occur. The three bearings that really matter are on a straight line and during playing there is never any force exerted on the fourth bearing.
This design has the advantage of making it impossible for the arm tube to rotate about its axis, even if a rotational force is applied. So it will feel like the well-known gimbal. When manually handling the arm, no rotation will be possible. During normal record playing, it is not in any way better than the one that uses a weight as described above.
Fig. 5 shows the way this construction can take shape, fig. 6 shows photographs of a tonearm using a fourth bearing. 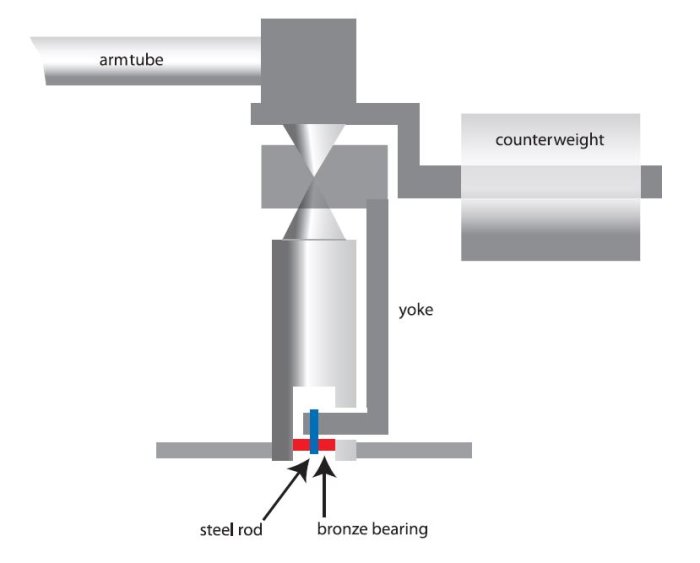 Fig. 5. Using a fourth bearing.
Magnetic
Two small magnets can also do the trick. They will be in the place of the lower bearing in fig. 5, and their mutual attraction will keep the yoke horizontal without inducing friction, much like the weight. The only practical difference is that the attraction/mass ratio will be greater with magnets than with a weight, therefore their resonance frequency will be higher.
I have not yet used the magnets, so I do not know in what sort of region this frequency will be. I expect it to be below the audio band, but it should also be above the resonance frequency of the sub-chassis mounting. I expect the magnet-type also to have a sturdier ‘feel’ than the weight type. It would also be feasible to use an oil bath to dampen the movements of the magnet and the yoke. 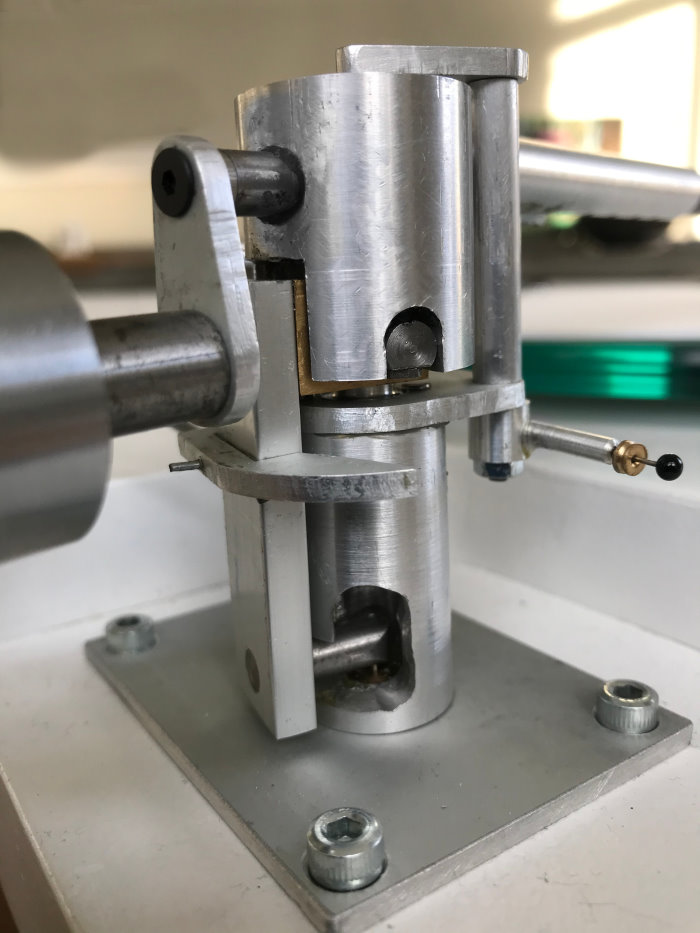 Fig. 6. Photographs of a tonearm using a fourth bearing.
Jan Fokkema
bearing@janfokkema.nl
www.janfokkema.nl/bearing
Breda, Netherlands
Any design ideas published here are free for anyone to use for any purpose, whether personal or commercial,
but it would be polite to mention my name as the designer. I am not aware of any patents relating to any of
these designs, but I have never carried out thorough searches so I could be wrong about that.