Electrostatic Loudspeakers
Martin Logan is renowned for it’s curve linear loudspeakers which are designed for exceptional sound reproduction. The production is fine and no costs are spared to optimize the construction and finish. The trademark of Martin Logan is the curved electrostatic panel which aims at dispersion of the radiated sound, which by physics will be focused and thereby will limit the listening  position. But all efforts will go to a point, after which additional efforts will not be economically valid. This is where the individual user can try and push the envelope even further, with additional costs and material which can hardly be part of the original package.
Quest for improvement
The Quest is one of the bigger speakers in the nineties making the name and fame of Martin Logan. This speaker was and still is well favored by many music lovers all over the world. The ReQuest is a newer enhanced version extending the lifespan of the speaker well into the new millennium. Basically the Quest and the ReQuest share the same construction. These speakers are (as often at Martin Logan) set up as a hybrid with one large bass unit in an enclosure that also contains the crossover filter. This filter is one of the places to find possible improvements. The choice of filter components makes can be wide and is subject to personal taste.
A second place to look for possible enhancements is the enclosure. The bass cabinet and reasonably sturdy frame for the ELS are integrated into one speaker so possibly the mechanical energy from the bass sounds can interfere with the sounds radiated from the electrostatic panel. As an electrostatic requires relatively low excursions to radiate sounds (compared with cone speakers and tweeters) these interferences are of a greater influence than in conventional box speakers. At least, this is my assertion and I’ve found tremendous improvements possible when ironing out mechanical vibrations in ELS frames so I stand by this assertion.
The crossover filter 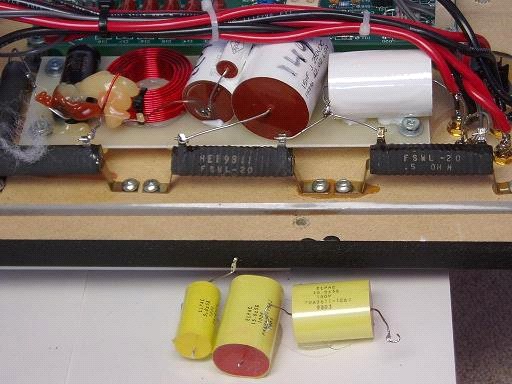 In the very nice Martin Logan website https://www.martinloganowners.com  one owner has written an article on the change made in the crossover. His idea was that the simplest and most cost effective upgrade is a ‘straight forward’ capacitor upgrade on the high-pass (stat) circuit. I’ve carefully read his article and decided to replicate his idea. But I did choose a different brand of audiophile grade capacitors. Opposed to his Auricaps I’ve chosen LeClanche for a well informed personal friend advised these to me.
The original caps in my ReQuests were Elpac’s as opposed to the Solen versions mentioned by the original writer. The three capacitors values to replace are; 5uF , 10uF and 15uF, all 100 volt types. As the 5 uF version proved unavailable in the LeClanche ranges, a combination of two caps was used to get the required value. The procedure to change the old caps with the new ones is simple. Keep in mind that all electrostatic speakers use a high bias voltage supply to the stators, so you have very high voltages going on inside there; so be very careful. I unplugged the speakers for a holiday and afterwards made the mod. After 10 days of rest all voltages were gone. As this procedure is very aptly described in the Martin Logan website I will restrict my story to the foto’s. As much as possible I avoided the original supplemental connecting strips and connected the components directly to one another.
The speaker enclosure 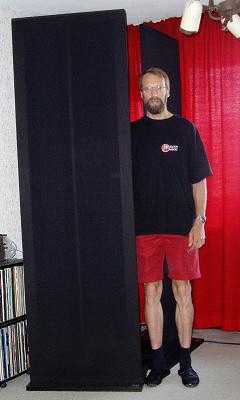 As said earlier I am a firm believer of a vibration free base for the middle and upper frequency regions. This is why I still own and love the rare Roksan Darius conventional loudspeakers in which’s two-way lay-out the tweeter is decoupled with the enclosure by springs. And remarkably is the result. I’ve enjoyed larger than life electrostatic panels (Audiostatic’s of 220 * 70 cm) which were deadened by 80 lbs of lead to stabilize the panels. These experiences have inflated my believe in dead and stable speakers.
It was no surprise to me one report in the infamous Martin Logan website claimed significant improvements when putting heavy steel sheets on top of the bass enclosure. When reading his story I immediately related this to my own putting of 16 lbs of steel on top of the base cabinet. I’ve done so to put in re-use the flux dumpers of my previous large Audiostatics. These flux dumpers were tailor made for these Audiostatics and were placed directly on top of the large audio transformers of these humongous panels. But when the Martin Logan’s were reeled into my music system the flux dumpers were put at the back and on top of the bass enclosure as this is the closest position to the audio transformer as I could get.
When reading the comments in the Martin Logan website article I realized I could have heard an improvement because of the stabilizing mass in stead of or in addition to the original idea of transformer flux dumping. Also the previous experienced benefits of stone mass put on top of almost all box type speakers sprung into my mind. Obviously there is a profit to be gained from fixating the loudspeakers construction. Building a electrostatic panel into a stone wall seems to prove this point in an extreme example. The same effects can be gained from weights to try and fixate the electrostatic panels into the room as well. This idea was put into my mind by the Martin Logan website article. On top of the bass cabinet a large steel sheet can be placed without any problem so I tailored some additional steel weights for the Martin Logan’s. 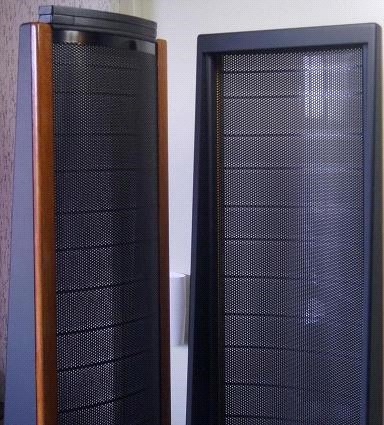 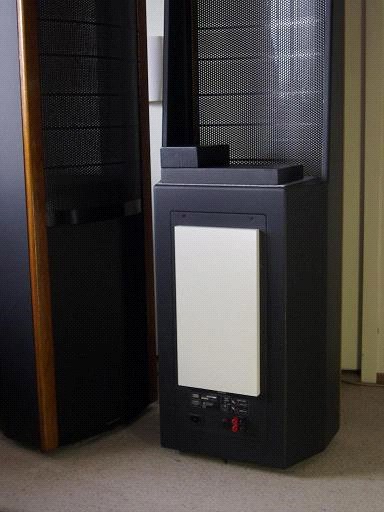 As this only stabilizes the bottom part of the ELS panels I additionally came up with the idea of putting the original weights on top of the speaker frames. The weight on top reduces the movements on the top end of the enclosure and might be of even more importance. Listening tests resulted in very positive impressions for me and my listening friends so a few curved steel sheets were prepared to put additional weight on top of the panels as well, possibly giving the best improvements overall.
When I was at the topic of minimizing resonant behavior of  the enclosure I also paid attention to the back panels of the Martin Logan’s as these seem to be most coloring of the enclosures. Adding an inch thick additional panel forces most resonances out of the way of music, and is shown in the pictures as well.
Henk Schenk.